“A lot of people think the Duwamish River is just a sacrifice zone. But the river is still alive.” Mark Powell said after swimming the 55 mile long river.

As he swam, he encountered schools of pink salmon, a bobcat, a couple of mink, three river otters and an eagle, but he also saw a lot of trash including a shopping cart, a metal desk, a soccer ball, a bicycle, a washing machine and lots and lots of soda and beer cans. When we were down at the river we saw many, many ducks, around 6 Blue Herron, and then closer to the mouth of the river we saw some juvenile fish. The water was too murky to see anything else, but there was plenty of trash on the trails and on the waters edge.

There was also a substance of some sort covering the surface of the water near the shore. It was actually really gross if you got close enough, shiny and looked greasy almost. Something you wouldn’t want to swim in. “Because that is the part of the river most people see, they forget, if they ever knew, that the river begins high in the mountains, threading a more than 500- square-mile watershed, and starting clean, Powell said” (Mapes). It’s crazy to think how such dirty water once was clear and pure from the freshly melted snow.

Salmon also swim this river. Native chinook, chum, coho, winter steelhead, and pink salmon seen in the thousands use this river to find their way back to their hatch site to reproduce and have their own young.

Powell said that when the river changed to the Duwamish it also changed to murky. He was shocked by the change and wasn’t able to see any fish anymore. At one point he found and explored a storm drain 10ft high and 8ft wide. This had storm water runoff straight from the streets and into the river. So every old coffee from the day before sitting in your car that you dumped onto the street, probably has made its way into a local river and into the sound.

Right now there is a $342 million superfund cleanup plan in place to start the extensive cleanup of the river. It’s estimated to take about 17 years for a total clean up because of how much dredging, capping, and landscaping toxic chemicals near and in the river. Soon enough the local fish of the river including, flat fish and some shellfish near the mouth will once again beagle to caught and eaten by the locals. But as for now the toxic levels of the fish are too high for human consumption. 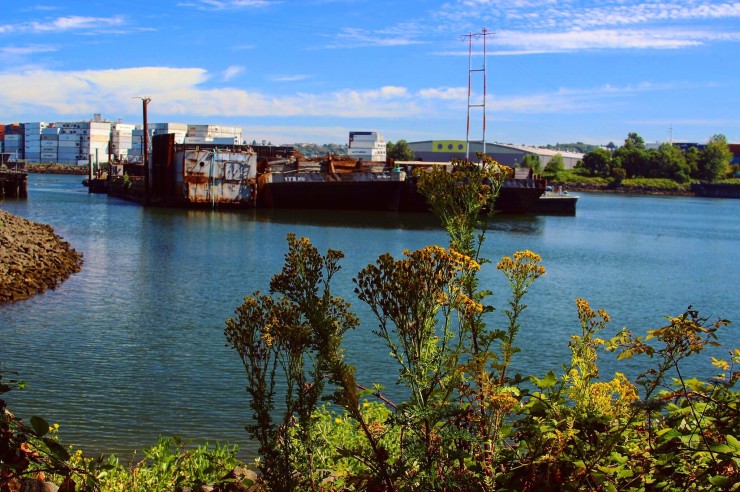 second picture: this was at the first sight we visited. There was a glossy film at the top of the water.

Third picture: the river was made straight for huge cargo ships like this one to have easier access into the river and different drop off zones for the specific cargo.

Fourth picture: in the background of this picture you can see the brown of the river and how it looks more like dirt for more flowers rather then the actual river that these flowers get their water and nutrients from.