On Tuesday, the Puget Sound We Love You campaign went whale watching in the Salish Sea. We were very lucky to see southern resident killer whales from L-pod! This inspired us to share with you some amazing things about these awesome animals.‬ Orcas are amazing physically, which makes them incredible to see in person. They are much bigger than most people realize; males can be twenty-six feet long and over six tons. Imagine a six-ton whale jumping completely out of the water! Because they are out of the water so much, but live mostly under the surface, orcas face an interesting problem: vision. Light travels differently in water than in air; because water makes it travel slower, it bends in different ways. This is the reason that fish eyes are so different from our own. Orcas have evolved eyes that allow them to see as well as we can in both situations (as long as plankton isn’t clouding the water). Strong muscles around the eye can actually change its shape, perfecting the lens for both types of light.

These whales also have incredible hearing, which they put to use when plankton or other particulates make the water to cloudy to see. They can hear sounds within the frequency range of about 0.5 to 100 kHz, which is almost six times bigger than the range heard by humans. They can also pinpoint the direction sounds are coming from, which is difficult underwater, and due to the properties of sound in water, hear calls from other whales that are miles away. The crazy thing is scientists are still unsure of how this exactly works. They do have auditory openings a few inches behind their eyes, but sound would have a hard time traveling between the water in the ear canal and the air in the inner ear and the auditory canal is greatly reduced to the point that many scientists think that they are no longer functional. Instead, it is likely that orcas receive the vibrations of sound with their lower jaw. The bone is hollow, very thin in the back and filled with oil, which probably transmits the vibrations directly to the inner ear bones, which sit directly below the brain on each side. With these crazy systems for seeing and hearing, I naturally started wondering about how killer whales smell. It turns out that as their nose moved to the top of their heads to become a blowhole. Orcas seem to have lost all sense of smell. It is a good thing their other senses work so well! Despite this lack, they do seem to be able to taste fairly well. Research has shown that dolphins can detect flavors such as sweet, sour, bitter and salty. Each group of whales also has a distinct diet.

Orcas are magnificent creatures and we need to do our part to protect them as their only predators. First, we need to keep our ocean clean. Many chemicals are found in the Salish Sea, PCBs, DDT, and flame retardants (PBDEs) build up in the food chain and cause serious health problems. Orcas are at the top of the food chain so they have high levels of contaminants. Southern resident killer whales are some of the most toxic marine mammals in the world. Next, we need to make sure they have enough food supply. Orcas love salmon, specially, Chinook. However, the orcas may have trouble finding enough to eat as many runs of salmon or endangered or threatened. Some of the threats to salmon pollution include dams, habitat loss, pollution, climate change and fishing. 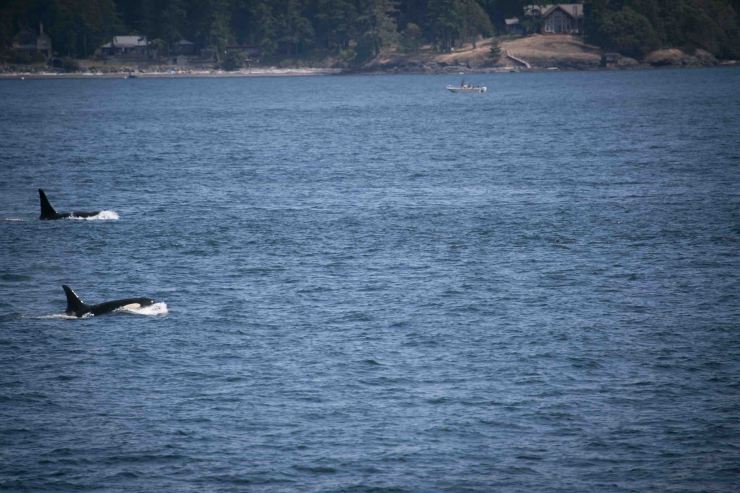